What Wade and Warwick Said

Something remarkable happened during the farewell reception last fall. Warwick Schiller and Wade Black were chatting after Wade’s arena presentation. Wade was reflecting on what he could have done better. Warwick smiled and noted that the horses Wade worked with – young, off-the-track thoroughbreds – were pretty much set up for failure by their initial years of training. They agreed that the typical young thoroughbred is not given much of a chance to behave calmly and reasonably in hand. And that’s just the tip of the iceberg. Too often, they agreed, these horses don’t have their minds in the right place to lead well, give handlers their space, or move off light pressure. How to not lead that horse around by the chin? 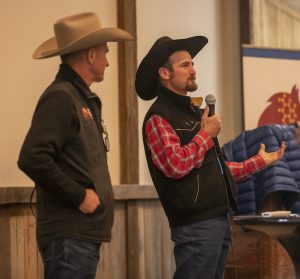 They lack what many of us consider to be essential building blocks for a healthy horse-rider connection. The trainers, owners, care givers, and barn managers in this industry all bear some responsibility for producing this unfortunate situation.

Why was this remarkable?

We were impressed that such an accomplished cowboy would admit to feeling that he’d done less than stellar work and share his frustration with company at hand.

We were excited that we could highlight some constructive criticism of a billion dollar industry and the less-than-best practices they follow.

BHPS director Maddy Butcher suggested Wade and Warwick share some of these thoughts with attendees, who seemed grateful and enthusiastic to hear a bit of this debriefing.

Wade Black: I got done with the presentation, and man, I thought that really did not go very smoothly and what I was looking for, with a breakthrough or something, didn’t happen. Anyway, I was telling Warwick, ‘Man maybe I should have done that differently. Where the horse was, in that state.’ To be honest, I haven’t worked with a lot of off-the-track thoroughbreds and it was just very different than a lot of horses I’ve worked. 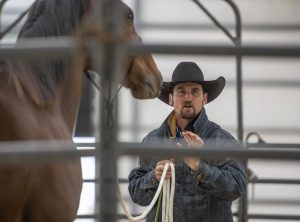 The big thing is in training. I mean, that horse was trained a certain way. When I stepped into the round pen, well, that horse had had a lot of training…I didn’t get the result I wanted to get…I was talking with Warwick and was thinking back to riding broncs. You kinda getting your butt kicked and maybe it wasn’t smooth.

But, anyway, there were tons of things I should have done differently and I was really glad to talk with Warwick. The big thing was that there had been so much previous work with the halter…Sorry if it wasn’t a very good demo.

Warwick Schiller: I talked to Wade out there and I said, ‘it’s hard to retrain a well-trained horse. That horse was very well-trained. And you probably look at his behavior and go, well, he wasn’t trained to do that, because that’s not good. The horse doesn’t know that.

When you pick up on that halter and you’re trying to learn one of three things, as Wade said, it’s whether the horse learns to give, or wear it, or resent it. 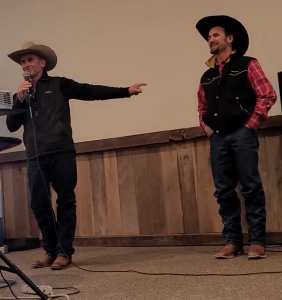 Warwick: The horse had been taught to ignore his handler. The thing I saw out there was juvenile behavior. In a herd, the only horse who allows another horse to lean on them and look away is the mother to the foal. Up until a certain age, that behavior is tolerable. They are in a juvenile stage at that time. But once they get to a certain age, the mother says, ‘hey, you’ve got to stay on your own feet. You have to pay attention and be aware of your surroundings. You have to have a bit of self-confidence.

So if we’re talking about wanting to not leading a horse by the chin, it’s not just about that. It’s easy to not have all these bad behaviors if you can just do little things. 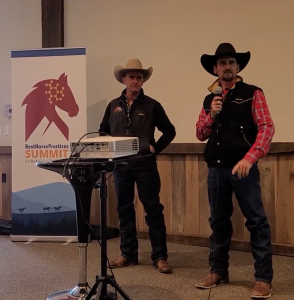 Wade is always talking about teaching kids. If you can teach kids the right way from the beginning, you don’t have to unteach them when they are 18 or 16 or 15. And that’s when they’re untrainable. At that point in time, the decisions they’re making are life-threatening. When they are 3 and 4, they’re not.

And there’s more to it than that. I’d say there was stunted emotional growth.

BHPS director Maddy Butcher: Sadly, these situations make for a bit of job security for good folks like you two, as well as trainers like Amy Skinner, Katrin Silva, and others, with the steady need to retrain these horses from the ground up. It’s also job security for folks in the slaughter stream, because that’s where many of these horses end up when their owners can’t make progress with them or get hurt or whatever.

Wade: It’s worthwhile to really evaluate what’s going on. Evaluating the training, the quality of training, and really what are we training them to do? Chemically what’s going on? So, hats off to you for having these conferences and relating all that. 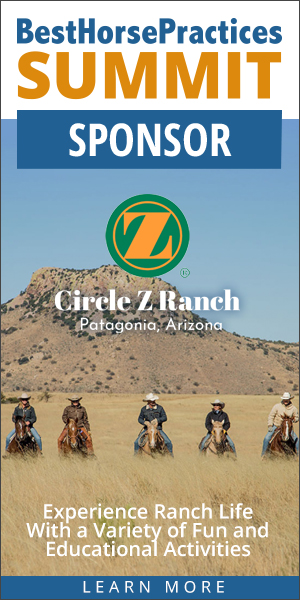 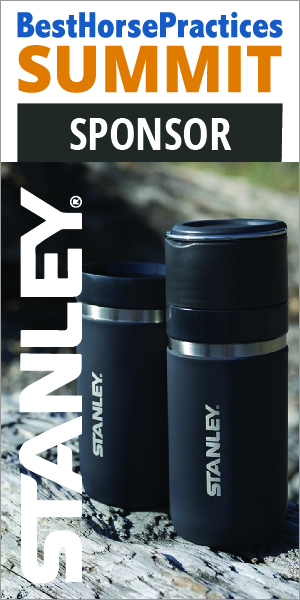